The soft haze of mystery

The summer Jake turned fourteen, he caught a sudden glimpse of his aunt undressing – a roundness of flesh in between her body and arm as she removed her bra. His head fogged up, but through his blood came a crisp pulse. He backed out of the room, unable to look away, until she turned at the sound of him; Jake turned too, hurrying back down the hall. He had no words to explain why this was wrong in his mind, just the feeling in his body, which he baulked at because of its mystery.

That same summer he had to water the garden of a friend of his mother’s. He could feel the tide in him; a hidden, silent moon pulling. He used to set out on his bike to the Henderson’s flat near the common. It was hot enough that everyone was showing something. Skinheads with their shirts off, tattoos green against reddened skin. Girls in shorts, legs bare, tiny feet tucked into plimsolls. The scent, leaking through Jake’s skin, filled his nostrils so that breathing became much more than taking in air – there was feeling and taste there too; warmth.

The Henderson’s building was in a gated complex. Their flat was on the third floor, the block nearest the pool where there was also a pavilion for courses and events. Jake’s mum and Mrs Henderson used to do yoga there. He’d had to go to the class once because he’d finished school earlier that day. It was simpler to find his mum there, rather than sitting outside the house – besides, he was thinking: I’ll just sneak in and get the key out of her bag.

The yoga teacher was in a shiny, fuchsia leotard. She had electric turquoise leggings, put on first so that the fuchsia of the leotard came up tight between her legs. When Jake came into the pavilion, she was bent over. The top half of her body was parallel to the floor, both arms ahead of her, flying. One leg held her up like a flamingo – the other was reaching behind. He could see the pink ball of her foot. Her arse was filled with muscle: a firm, steep semi-circle.

This was another of those moments – that cloudy, luxurious mystery. But with all these other women in the room – fat women, old women, and his mum – it felt horrifying. And then Mrs Henderson called his name so that everyone looked. The teacher stopped and came over so that Jake saw her even closer up, the stretch of the edge of the fuchsia leotard running across the top of her breasts – a hot shadow of cleavage.

Mrs Henderson’s garden consisted of a balcony filled with flowers and grasses in steel tubs. It was nothing like the sentimental pots with red and white fluffy petals that Jake’s mum had. Here was a meadow garden, but up high. There were towering, steel cylinders with tall grasses that lazed from side to side in the wind. Bushes of lavender hummed with bees. Some kind of climber had made its home around the French windows, and attached to the rails were boxes and boxes of poppies – bright and yet translucent in the sun.

Jake would go up the three flights of stairs – there wasn’t a lift – and let himself into the apartment: second on the right, at the end of the corridor. He’d heard about the neighbours – the Lehmans – but only to know they were an older couple with a niece who was staying with them while her mother was in the hospital. He knew it wasn’t the regular kind of hospital because of the way his mum talked about it.

Too scary. It could happen to anyone.

Jake came for a few days, filling up the watering can at the sink and then taking it out onto the balcony.

Mrs Henderson had specifically had him round before she went on her trip to ‘show’ him how to water her garden.

Now, I know you’ll be thinking this is dumb, she said. But you’d be surprised at how people don’t know how to water plants, unless they’ve had them. Mark’s hopeless with them, just a quick flick like this – and she demonstrated, walking with the water running out.

Jake wondered what was wrong with that: she seemed to be watering her plants.

Mrs Henderson laughed – look at you, you’ve no idea what I’m talking about! she said.

He shook his head.

Come here, she said, pulling him over.

You stand, she told him. You stand like this, over one tub, and you pour the whole damn lot. Then you go into the kitchen, fill it up and then – she took a small step to the left – you stand, again.

Jake nodded and she put her hand on his shoulder, leaning in a little closer.

Now, you might start to think, ‘this is dumb’, after going back and forth a couple of times. You might think, ‘hell, I’m going to do two tubs per can-load of water’. But then that wouldn’t be watering my garden properly, would it?

He smiled and she tugged his ear.

So, Jake, do you think you can do it?

Plus, look out for next door, Mrs Henderson told him, winking.

Look out for next door.

What Jake thought she meant was, like: see if there are any problems. Or, maybe they were going away too, and had asked if she knew someone who could keep an eye on the place.

But why the wink?

Basically, he didn’t know what she meant. But then, when he was on his fifth load of the watering can, he found out. The French windows next door opened, and a girl’s leg stepped out. The movement was nimble and brought a neat body in a pair of shorts through after – tan-coloured hair that blew black at just the moment she went from inside to out.

Oh, the girl said, glancing at Jake. He caught that she was holding a glass, something cold as there were drips coming down on the outside.

She turned and went back inside.

So, that was the niece, with the crazy mum.

He stood there a long time, running those seconds over in his head. He thought about it as he went each time to the kitchen, filling up the can. Every time Jake came back out, he imagined her coming out too, or wondered if she’d be there on the balcony already.

Three days passed and he didn’t see her, but each tub got two full watering cans and the leaves began to turn yellow so he thought he better ease off. Then the weekend came and he wondered what she was doing.

On Monday, Jake saw her again.

She came out in much the same way – same shorts, same clean, light hair.

She looked over, and then waved what was in her hand at him – a book. Then she sat down on one of the chairs the Lehmans had out there and began turning the pages.

Jake watered the plants and watched her read. Sometimes, he imagined it was all a show, put on for him: she wasn’t really reading. But then, if it was put on for him, wouldn’t she have to look up at least once to see the effect it was having? 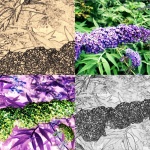 When Jake was in his twenties, and his first proper girlfriend broke up with him – she was moving out of the flat they’d been renting together – she told Jake he lived in a dream world.

That ole chestnut, he said.

She growled. Her name was Nina.

The thing is, Jake told her. You’re moving out – why do you still have to say that to me? Do you think I haven’t heard – all these years? Or, are you thinking: just one last time, I’ll tell him to grow up and maybe he will.

If that’s what you think, he told her, shrugging.

Do you know what your problem is, Jake?

What? Tell me, what?

You’re still fixated on that girl – that niece – like I said, can’t live in the real world.
They’d fought so much, but it was always the same fight – it wasn’t going to get solved.

The weird thing was, after Nina went, there was all this space: it was just him, nobody else to blame. Jake began to think about whether he lived in the world or not. He wondered where he did live. Was it make-believe, the dream of ‘what if’ – what if he had spoken to the niece? 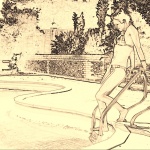 He’d seen her in the pool one afternoon, floating on her back, this little white bikini. Jake imagined her watching him watching her. But he never did anything.

If that’s what he thought she was doing, why didn’t he go down there and say – how about it?

That was the problem – having no idea what came next after the tide in your body rose up. He felt what he wanted to do, but there were no words.

The final time Jake saw her, she was out on the balcony as he approached the building. His heart went mad. She was in her bikini. Something had to happen. But when he went out there with the watering can, she didn’t look around. Through the emerald veil of Mrs Henderson’s grasses, he could see her legs stretched out on the sun lounger.

Why did she have her back to him?

He watered the garden – maybe even a few extra cans, risking the yellow leaves – until he thought: this is dumb. It was all beginning to hurt. He came indoors and paced around. He felt like an idiot. He wanted to scream, weep. Finally, Jake went right up to the French windows and stood with the grass between them, just watching.

I know you’re there, she said.

Jake’s ex-girlfriend was wrong – he wasn’t living in a fantasy world. He was fully aware he’d ducked back inside the Henderson’s flat that day, feeling too much of a fool for running away so that he couldn’t go out there again. All he could do was leave: sulking down three flights of stairs. Only then did he have the guts to turn around – it was the final realisation of what he was walking away from – but when Jake looked up at the balcony, the niece was gone.

Jake wanted to call his ex-girlfriend up and tell her that he wasn’t fantasising about spending the rest of his life with the niece. You don’t get together with your wife at fourteen!

She wasn’t some symbol of the perfect woman either – because he did used to worry about her loony mum, thinking maybe the niece had something in her genes. If Nina thought Jake couldn’t really love her because he was in love with the niece, she was wrong.

I know you’re there.

What did Nina ever say to Jake that would ever touch him as much as those words?

The niece had seen him out of the back of her head, with all that grass in the way. You couldn’t love a woman until they were able to see you like that. How could he have cared about Nina when she never noticed his presence in that subtle way, and in that subtlety feel him, the real Jake – a boy desperate to love, but afraid?

This is a new short story. I am going to be posting pieces of fiction here each month, and would love your feedback!

Some history, a bit of fiction, with me in there somewhere.
View all posts by gabrielablandy →
This entry was posted in Fiction and tagged Fiction, Garden, Relationships, short story, Summer Love. Bookmark the permalink.

46 Responses to The soft haze of mystery